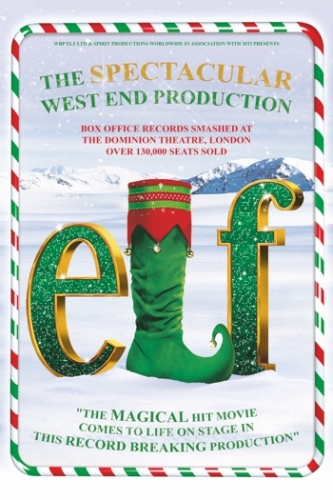 Elf is one of the most popular Christmas movies of all time, breaking all records for a family show at Christmas.  Elf is shown on television during the Christmas season, year after year , in different regions of the world and consistently tops the ratings.

And now Elf is available as a theatre show.  With three versions of the show touring America, and one version touring the U.K., Elf is the highest grossing Christmas show currently touring.   It smashed £8.5 million at the Dominion Theatre London in a 10 week run, and took over £3 million at the Lowry Theatre Manchester in 5 weeks in 2017.   It broke box office records at Maddison Square Gardens, New York, selling more tickets than any previous Christmas show.

In association with Jon Conway and M.T.I, Elf is now available in various countries worldwide.  (Note: except U.S.A. And U.K.)